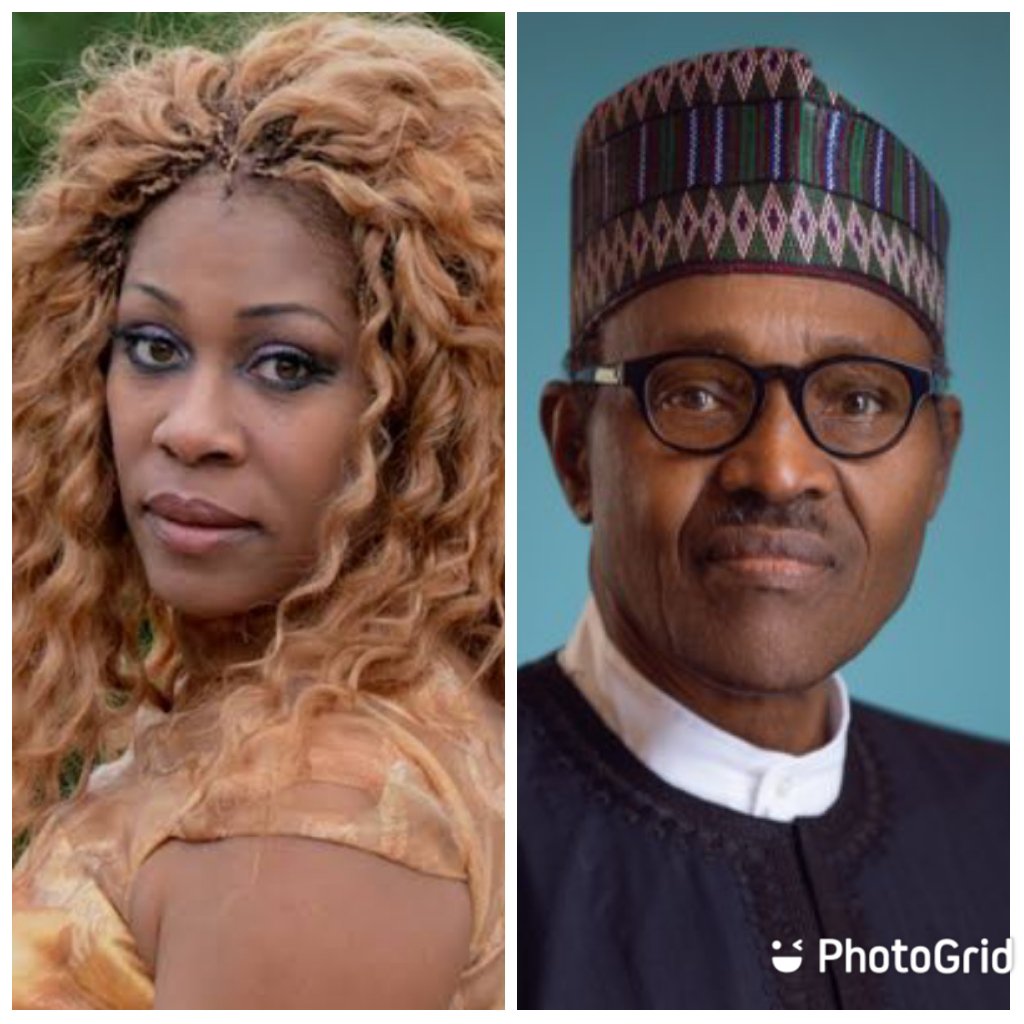 Veteran Nollywood actress Regina Askia Williams has written President Muhammadu Buhari over killings in the country and the threat of war to Eastern Nigeria ethnic group.

Citing the civil war of 1967-70, President Buhari threatened to treat the people in the language they understand.

Regina Askia accused the Buhari led administration of having ‘no solid plans of integration nor considerations for the Igbos.’

She further told the President that what was expected was for him to extend the olive branch while exploring all options for peace.

Your Excellency PRESIDENT MUHAMMADU BUHARI President Muhammadu Buhari Support Group
Sir,
Thank you for your speech for which we all waited with bated breaths.
Thank you for promising to work on the present situation of volatile insecurity in Nigeria.

Mr President Sir, I must remind you, that you cannot put out fire with fire. Your administration has rehabilitated unrepentant terrorist, has paid monies out to kidnappers, has protected rampaging herdsmen even as they sack villages burning, looting and raping innocent women.

When South-East Nigeria requests a referendum, when they complain they feel excluded from opportunities in Nigeria to mention just a few grievances, there is no negotiation, no rehabilitation, no communication.

We were hoping that your speech would call for calm, would call for a discourse, would extend an olive branch after which, all options would be on the table.
We have instead seen fighter planes over Akwa Ibom, (what did we do and how come we are always collateral casualties of war damage), armoured tankers rolling into the East

Misguided young men and women slaughtered in droves, not by bandits nor terrorists, but by the army of the nation to which they pledge allegiance.

As if that was not enough, Your speech threatens to visit onto the children the carnage Nigeria visited on the fathers.
Your speech reopens wounds that were buried in emotional shallow graves and banal declarations of “no victor no vanquished.”

At this point Mr President Sir, it seems your administration has no solid plans of integration nor considerations for the Igbos, it is also clear you would not choose secession, rather than a repeat of the massacre of 3 million South East Nigerians (the biggest genocide after the Jews), I would suggest to do all in your power to maintain the peace and let Igbos live to engage in a referendum with subsequent governments who will hopefully be able to marshal that process.

The world is watching. There is already the ENDSARS debacle, a stain on your government, don’t add the massacre of the Igbos as another stain.
There is such a thing as the ICC and war criminals from the Nazi era are still being persecuted. Our every year young Mr President will have no immunity against war crimes trial if so declared.

I dare say your lieutenants do not have the spine to give an honest situation report.
You will get a better feel of the situation from even social media which does a better job than those around you. They are more or fewer sycophants more interested in telling you what they think you want to hear than the truth of the matter.

If our security forces are stretched thin, hire mercenaries to immediately provide security against ALL criminals from NORTH TO SOUTHERN Nigeria.
I’m so certain General Idiagbon of blessed memory would have also gone after not only criminals in the bush but also those in office who subvert progress by openly or covertly dealing with criminal elements but that is the story of another day.

In the remaining 2 years of your regime,
Try to ensure peace.
Try to ensure free and fair elections.
Stop the ongoing carnage in South-East Nigeria.
Thank you for your efforts so far but I remind you again.
You must not fight fire with fire.

Thank you for listening

(I’m outside Nigeria, let nobody look for me)
Regina Askia Williams.