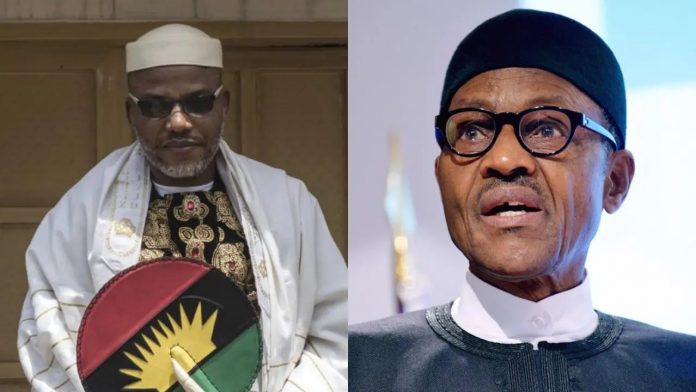 The Buhari regime’s official narrative for banning Twitter in Nigeria is that Twitter is the platform of choice by digital dissidents to amplify their treasonous, separatist rhetoric, and IPOB’s Nnamdi Kanu has been invoked as the most dangerous culprit of this.

Of course, every halfway smart person knows that that was a transparently infantile lie. Twitter was banned in Nigeria precisely because Twitter’s decision to delete Buhari’s tweet threatening genocidal rage against separatists hurt his brittle ego.

In a story titled “The Real, Petty Reason This President Ordered a Nationwide Twitter Ban,” America’s well-regarded liberal Daily Beast newspaper exclusively reported on June 7, 2021 that Twitter’s deletion of Buhari’s tweet both angered and embarrassed him and that these emotions were further exacerbated when Facebook also deleted his post.

An insider told the newspaper that in a fit of raw rage Buhari wanted to ban both Twitter and Facebook in one fell swoop but “succumbed to pressure from his closest aides not to immediately target Facebook… so that it isn’t blatantly obvious that he was acting in response to the deleted posts.”

“The action taken by Facebook ultimately triggered the ban on Twitter,” another insider told The Daily Beast. “Even though Facebook wasn’t affected, things could change in the near future.”

So, it is obvious that the Twitter ban was mere vulgar personalization of power. Because he was embarrassed and angered for being publicly censured by Twitter, he chose to ban 200 million Nigerians from using Twitter.

I hope he will also ban Nigerians from other foreign, private affordances that he uses if he is reprimanded for flouting the rules of those affordances.

For example, a presidential press statement said on Thursday that Buhari was headed to London for yet another medical tourism, which another statement a day later said has been postponed. Nigerians should hope and pray that when he goes to London, Buhari should contravene the rules of the private hospital he will visit and get censured for it.

That should get him chagrined and angry enough to not only leave the hospital in a huff but to also stop all Nigerians from patronizing it—and maybe all UK private hospitals.

Sounds crazy? Well, that was precisely what he did with his birdbrained Twitter ban and threats to ban all social media after he was censured. Twitter is a private, foreign company with its own rules and regulations, which Buhari voluntarily chose to abide by when he signed up to use it. No law says he, or anybody, must have a Twitter account. It’s entirely a personal choice since Twitter is a free-to-use private app.

Since his personal emotions affect state policies, he might as well put this to good use. Banning Twitter has caused Nigeria to lose billions of naira and rendered many young men who use it for business jobless, but it has made exactly zero dent on Twitter’s bottom line. But Buhari’s medical tourism to the UK drains billions of naira from Nigeria. So, let’s hope he’ll be angered and embarrassed by the UK private hospital he uses so that his pettiness can, for once, be productive for the country.

In the same vein, in its face-saving justification for the Twitter ban, the regime said Twitter had to be banned because it allows treasonous dissidents like Nnamdi Kanu to spread hate against Nigeria. Well, the UK, where Buhari goes for medical treatment, not only hosts Nnamdi Kanu from here he broadcasts hate, it is also considering granting asylum to IPOB and MASSOB members.

If Twitter can be banned from Nigeria for providing a discursive arena for IPOB and its leader to ventilate anti-Nigerian sentiments, Buhari should avoid going to the UK and then ban Nigerians from going there as well because it hosts Kanu and wants to extend asylum privileges to separatists that the regime dreads. The UK seems to me more “dangerous” to Nigeria than Twitter is.

Banning the UK would be consistent with the logic of the regime’s official justification for banning Twitter.

Of course, we all know that Buhari’s “patriotic” bravado is activated only when he has nothing to lose personally. If the London hospital he receives treatment from asks him to kiss Nnamdi Kanu’s feet as a precondition for his treatment, I bet his only question would be, “for how long should I kiss his feet?”

Buhari waxes patriotic only in words, but every opportunity he has to materialize his patriotic proclamations, he bails. Recall that more than three decades ago he said, “This generation and indeed future generations of Nigerians have no other country they can call their own. We must stay here and salvage it together.”

He never believed a word of what he said because in February 2016 Buhari told Nigerians in the UK that he had been using his UK doctors “since 1978 when I was in Petroleum” [i.e., when he was Petroleum Minister.] His daughter also told BBC Hausa that she doesn’t speak fluent Hausa because she lived mostly abroad “with white people” when she was growing up.

You can’t “stay and salvage” your country, especially as a high-ranking government official or a president, by perpetually disdaining your “country’s best hospital for medical care in Britain,” as the Los Angeles Times of February 20, 2017 said of Buhari, perpetually vacationing abroad, and sending all your children to school in the UK.

Given what we now know of Buhari, it’s evident that his 1980s patriotic proclamation was just hollow sloganeering. Recall, too, that on April 27, 2016, he said, “While this administration will not deny anyone of his or her fundamental human rights, we will certainly not encourage expending Nigerian hard earned resources on any government official seeking medical care abroad, when such can be handled in Nigeria.”

Less than one month after this “patriotic” declaration, Buhari went to London, not to treat his ear infection (because, according to a news release signed by Femi Adesina, it had already been “treated” in Nigeria), but to have UK doctors examine his already “treated” ear “purely out of precaution.” Can you beat that quantum of hypocrisy and insensitivity?

By the way, Kanu posts on Facebook exactly what he posts on Twitter, but somehow, the Twitter posts are more dangerous than the Facebook ones even though they’re the same, so Twitter has to be banned and not Facebook. This regime’s honchos obviously imagine that Nigerians are just as brain-dead as they are.

It also turned out that Nigerian has never once asked Twitter to take down any post by anyone it deems injurious to Nigeria’s “corporate existence.” Not once. Not even Nnamdi Kanu’s tweets that they pretend to be losing sleep over.

Twitter publishes a comprehensive record of all legal take-down requests from all parts of the world, and it can be found here: https://transparency.twitter.com/en/reports/removal-requests.html#2020-jan-jun. Governments of 53 countries have, since 2012, made legal requests for the takedown of tweets that the countries said flouted local laws.

The record shows that between January and June 2020, “96% of the total global volume of legal demands originated from only five countries (in decreasing order): Japan, Russia, South Korea, Turkey, and India.”

It also pointed out that requests were made to take down tweets by verified journalists. “In total, two Tweets withheld in India under Section 69A of the Information Technology Act, 2000, and one Tweet was withheld in Brazil under paragraph X of Article 5 of the 1988 Federal Constitution. We took no action on the remainder of the reported verified journalists and news outlets accounts due to them falling under our protected speech policies.”

So, Twitter does take action against users who are reported to have flouted local laws of many countries in the world. Nigeria has never legally requested Twitter to take down anyone’s tweet even though the process to make a legal request for takedowns is pretty easy and straightforward. That’s all the evidence you need to know that the ban on Twitter had nothing to do with what people say and do on Twitter and everything to do with Buhari’s fragile and inflated self-image.

Why APC Politicians are Terrified by e-Transmission of Votes – Kperogi

Why Islam is different in Yorubaland and Hausaland – Kperogi