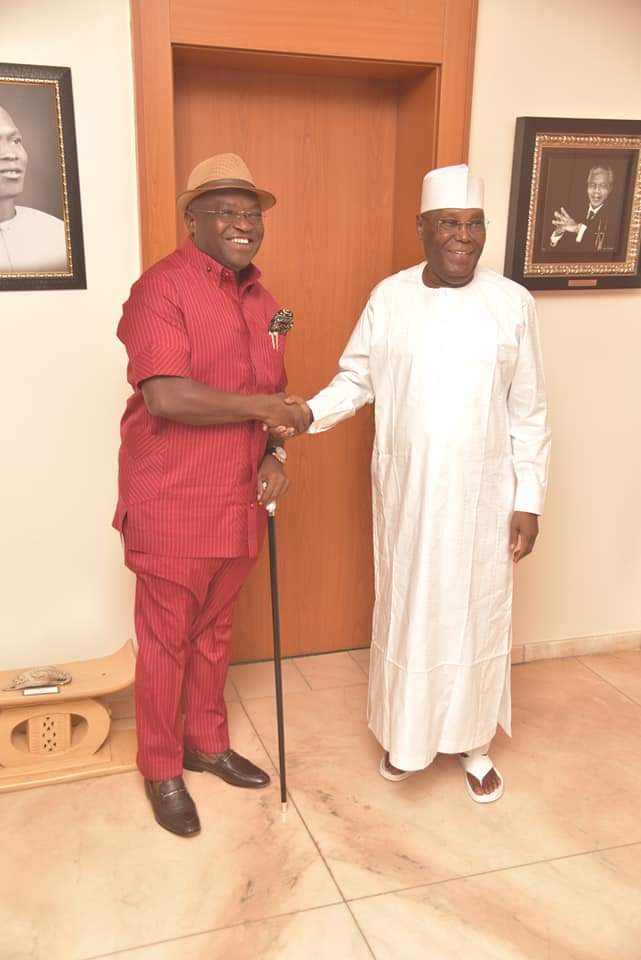 Abia State Governor, Dr Okezie Ikpeazu stated that South Easterners are interested in policies that will increase the ease of doing business in the country.

The Governor disclosed this on Thursday while visiting the former Vice President and PDP Presidential Candidate, Alhaji Atiku Abubakar at his residence in Abuja.

In a statement by the Chief Press Secretary to the Governor, Onyebuchi Ememanka, the meeting was at the instance of Alhaji Abubakar.

While congratulating the Presidential Candidate on behalf of himself and the PDP family in Abia State, Governor Ikpeazu reaffirmed his commitment and those of the entire PDP members in Abia State towards the strengthening of the party in the forthcoming 2023 Presidential elections.

He also informed him that the top on his agenda must be the institutionalization of inclusive governance in the country. According to him, people from the South-East feel profoundly alienated from the scheme of things currently in the country with no South Easterner in the top echelon of both the Executive, Legislative and Judicial arms of the Federal Government. This unprecedented state of affairs also persists in the entire security architecture of the country including the Para Military agencies with no single South Easterner heading any of these agencies for the first time in the history of the country.

Governor Ikpeazu raised issues around Ease of Doing Business in the Country, noting that apart from Security, this is the most important thing for South-East Nigerians.

“As natural Business People, Entrepreneurs and Small Scale Manufacturers, the Governor continued, “the people of the South East are interested in policies that will allow them to do and grow their businesses. Port reforms which will enable them to clear their goods from the nation’s seaports very quickly, rehabilitation of federal highways, etc are at the heart of the people of the South East.

The Governor also said that Peace and Security of lives and property are crucial to the survival of the nation. The people of the South-East want their investments and businesses to be safe and secure wherever they are.

Several other issues were discussed and Governor Ikpeazu extracted the commitment of Alhaji Atiku to lead from the front in the actualization of the issues raised. Alhaji Atiku assured Governor Okezie Ikpeazu that as a very detribalized Nigerian with strong ties across the country, he will if elected President lead a nation whose diversities will become unifying instead of divisive factors.

The former Vice President assured Governor Ikpeazu that as a successful businessman, he understands the issues that encourage the growth of businesses and the key role played by a stable and robust economic environment in the development of the national economy. He promised to vigorously pursue the growth of the private sector.

Alhaji Atiku Abubakar thanked the Governor for joining him to receive his Certificate of Return yesterday and assured the people of Abia State that if elected President, they would be integrated into the mainstream of the leadership of the country.

Governor Ikpeazu was accompanied on the visit by a former Deputy Governor of Abia State and a Member of the PDP Board of Trustees, Rt. Hon Eric Acho Nwakanma and others.