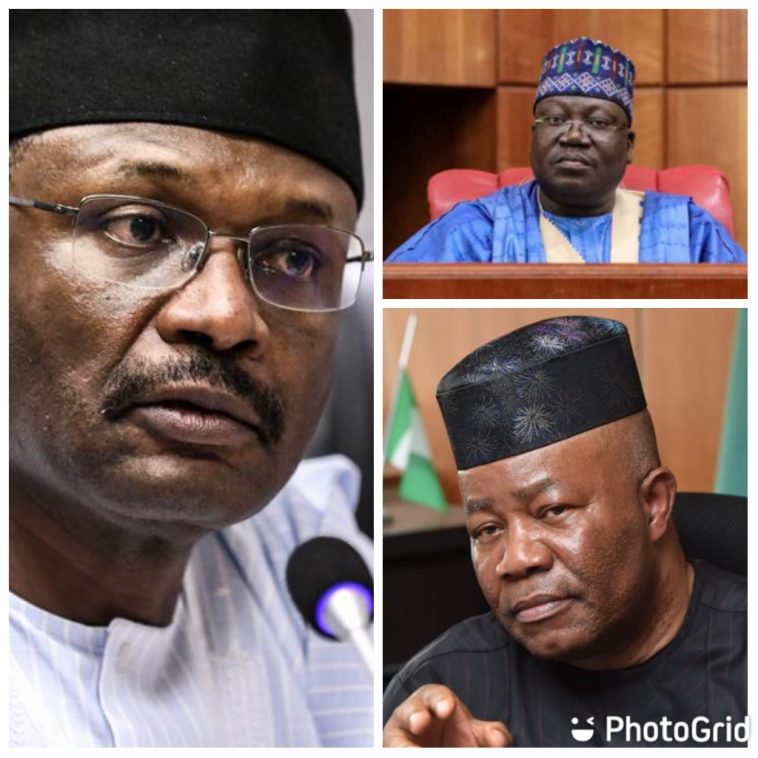 The Independent National Electoral Commission (INEC) is not a neutral arbiter of elections in Nigeria. It’s bought and paid for by politicians, and is amenable to manipulations by people in power.

This is a regrettable thing to say because there are at least two people at INEC for whom I have immense respect because of my personal familiarity with their antecedents.

Malam Mohammed Haruna, one of INEC’ six commissioners and one of the pioneers of modern journalism in northern Nigeria, has a reputation as an honest, honorable, straight-talking person who inspires the respect of all who know him.

Mr. Festus Okoye, INEC’s National Electoral Commissioner for information and Voter Education, is personally known to me. I related with him robustly when we both lived in Kaduna. He comes from the tradition of radical student unionism and human rights/pro-democracy activism. In all the years I’ve known him, I’ve always respected his cosmopolitanism and commitment to justice and fair play.

Although I am aware that power and privilege can change people, I was nonetheless ecstatic when Haruna and Okoye were appointed INEC commissioners because of my knowledge of their past personality profiles. I thought they might be able to influence Professor Mahmood Yakubu to steer INEC in the direction of greater transparency and neutrality.

I now realize that my optimism was misdirected. INEC is mired in such extraordinarily self-created moral and legal chaos that I doubt it can conduct any credible election next year.

On Friday morning, I woke up to the news that INEC had formally rejected Senate President Ahmed Lawan as APC’s Yobe North Senatorial candidate and recognized Mr. Bashir Machina who rightfully won the APC primary election for the seat. I also read that Senator Godswill Akpabio’s name didn’t appear on the INEC-validated list of candidates who will run for election from Akwa Ibom but that Udom Ekpoudom, who won the primary election, didn’t appear, either.

So, I celebrated what I thought was a small victory for decency, justice, and fairness. It turned out that I was misled by the news media. It’s not Uhuru yet. Neither Machina’s nor Ekpoudom’s names appear on INEC’s list because APC didn’t formally submit their names to INEC.

As Mr. Mike Igini, INEC’s Resident Electoral Commissioner for Akwa Ibom State, said during a current affairs program on Comfort FM in Uyo on June 15, “By virtue of Section 31 of the 2022 Electoral Act… we no longer have substitution by political party. What you have now is withdrawal by individual or nominee and or death.”

In other words, as I pointed out in a previous article that invited Malam Mohammed Haruna’s forceful response, neither Lawan nor Akpabio have any pathway to the nomination of the APC since neither Machina nor Ekpoudom, who won the primaries, have agreed to stand down for them.

This should have ended the issue if INEC were interested in justice and fair play. But, incidentally, it is Mohammed Haruna and Festus Okoye—two people whose antecedents suggest they’d be for justice— who are leading the charge that INEC can’t do anything about the illegal substitution of the names of the legitimate winners of APC’s primary elections, and that all that INEC can do is help aggrieved parties with the evidence they need should they decide to go to court to challenge their parties.

First, that strikes me as not just a blithe abdication of responsibility but as an unwarranted instigation of litigation. INEC should be doing all within its power to not burden the courts with lawsuits. The judiciary is already reeling under the weight of excessive litigation.

“Contrary to the views credited to Mr. Haruna, the powers of INEC have gone beyond ‘merely to monitor’ party primaries,” Falana said in response to Haruna’s reaction to my article on this issue. “For the avoidance of doubt, Section: 84 (13) unequivocally provides that ‘Where a political party fails to comply with the provisions of this Act in the conduct of its primaries, its candidate for election shall not be included in the election for the particular position in issue’. The legal implication of the provision is that INEC shall not include the candidate for the particular election.”

Falana pointed out further that “Section 29 (1) of the Electoral Act, 2022 which provides for the submission of lists of candidates and their affidavits by political parties states that ‘Every political party shall, not later than 180 days before the date appointed for a general election under this Act, submit to the Commission, in the prescribed Forms, the list of the candidates the party proposes to sponsor at the elections, who must have emerged from valid primaries conducted by the political party.’”

If INEC were alive to its responsibility, if it weren’t compromised and invested in seeing some candidates emerge as candidates, it should have queried APC for presenting the names of candidates that were inconsistent with the outcome of primary elections it observed and certified.

What is even sadder than all this is that Ahmed Lawan and Godwill Akpabio are only just prominent examples of this sort of open electoral fraud. They are not the only people who are illegally replacing people who won primary elections that INEC monitored and certified.

INEC is undoubtedly in bed with politicians to scuttle the 2023 election. As I said in a previous article, votes won’t count—like they didn’t in 2019—next year because INEC is anything but independent. It’s a dutiful, groveling poodle of the APC— and of politicians with deep pockets. It has no capacity or willingness to provide a level playing field for all contestants.

Recall that INEC extended the electoral timetable in response to APC’s instruction. On May 5, INEC had told political parties that its “deadline is firm and fixed.” It repeated this on May 10 when some political parties again requested it to extend its deadline.

That is precisely what is happening with APC candidates. INEC takes instructions from the leadership of the APC. The Electoral Law is irrelevant.

If the leadership of the APC can unilaterally tell INEC to loosen its “firm and fixed” deadline in order to give it an unfair advantage and then again tell it to not recognize candidates who won elections that INEC monitored and certified, it will certainly tell INEC whom to declare as “president” in 2023 irrespective of the actual outcome of the presidential election.
That was precisely what happened in the 2019 election, which Buhari lost by close to 2 million in spite of APC’s massive, in-your-face rigging in Borno, Yobe, Lagos, and Kano. As I write this, INEC has still not provided a comprehensive breakdown of the votes cast in the 2019 election like Jega’s INEC did in 2015.

They can’t because INEC just capriciously plucked figures from the air and assigned them to presidential candidates. That’s what might happen again in 2023, and the signs are already apparent.

What’s the point of “democracy” if something as basic as change of government through elections can’t be guaranteed, if the body charged with the responsibility to conduct elections can’t even perform a pretense of neutrality?

My illusions have been shattered because I’d thought that Yakubu had learned lessons from the electoral fraud he enabled in 2019, especially in light of the fact that this is his final term in office, which gives him the latitude to not be beholden to anyone– and the freedom to not have anxieties about losing his job.

At this point, I doubt there are many people who will miss this “democracy” when it is gone and replaced with something else. And INEC will take the lion’s share of blame if this experiment dies.