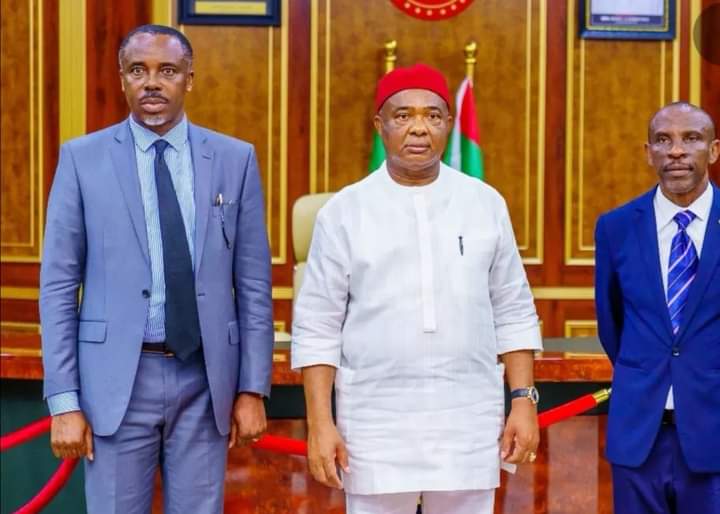 Imo State Governor, Senator Hope Uzodimma has posited that it was time to rejig the state civil service for effective and efficient delivery.

Governor Uzodimma made this assertion during the swearing in of the new Head of Service, Mr Raymond Ucheoma, during which the new Political Adviser to the governor, Enyinnaya Onuegbu was also sworn in.

Addressing the new head of service, the governor reminded him that, to whom much is given, much is expected, urging him to go and clean up the system, while promising to give him all the support.

He made it clear that it has become necessary to recover and revive the state civil service, as according to him, civil service is a white collar job that requires white-collar behaviour.

“Civil servants have to be our role model in terms of hygiene, dressing and conduct”.

Uzodimma said days were gone when respected offices are given to people as compensation for their political participation, as according to him, such positions will henceforth be by merit and capacity.

Speaking about Enyinnaya Onuegbu who was appointed Chief Political Adviser to the governor and head of the political bureau, Uzodimma said he has proven his loyalty beyond every reasonable doubt, even when he was dropped as commissioner.

“I know how many people who approached him to use him as instrument for political fight, but he resisted them”.

In his reaction, the newly appointed Chief Political Adviser, Enyinnaya Onuegbu described the occasion as “A very special day in my life”

He acknowledged that the governor was right in his observation, but made it clear that he made a decision many years ago that with or without political office, he chose to work with the governor as a loyal follower.

He promised to strive to deliver on the governor’s high expectation from the office.

“For a governor who is acknowledged as generous and welfarist person, we have a duty to support that his natural innate quality, to see that people are always happy with him.

“Also we need to address the issue of our people playing politics with everything. The first call of my office will be to remind our people that there is a political season and governance season, so we don’t use governance season to play politics. We must not play politics with everything. We must be sure that reasonable conduct expected of us must be observed at all times”.