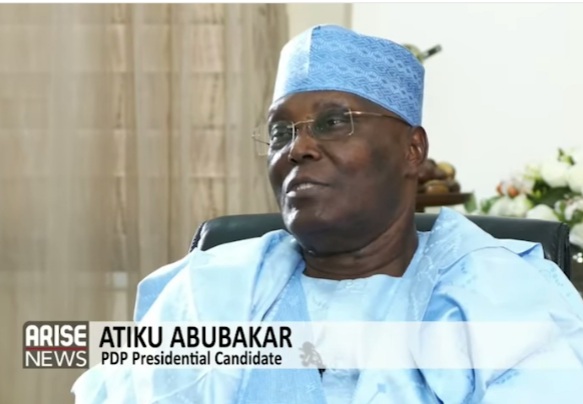 His claim that it would be a miracle if Labour Party’s Peter Obi wins the presidential election on account of his larger-than-life social media visibility—even when his party has no elected officials at any level of government— has aroused many Obi supporters to anger.

They were even more enraged by his contention that “In the north, 90 percent of our people are not tuned to social media.”

Well, given that Peter Obi was his running mate in 2019 and that most of Obi’s current zealous supporters were his social media foot soldiers, his remark was unwarrantedly impolitic, even a little arrogant. It’s worse that he fell into Nigeria’s familiar geo-ethnic fissure by isolating northern voters as his and implying that it’s their absence from social media that artificially inflates Obi’s online popularity.

A politician seeking a national mandate should broaden his appeal, persuade fence-sitters, and win over opponents.

Nonetheless, empirical facts support most of Atiku’s claims. Although Peter Obi’s supporters now delight in making silly, irreverent, delusive mockery of “structure,” there’s no example I’ve seen anywhere in the world where someone whose political party has no elected officials at any level of government gets elected as president of a country.

But there’s always a first time. Maybe Obi will blaze a trail and go into the records as one man who became president of a labyrinthine and transitional country like Nigeria through a weak party that he joined on a whim at the last minute, a party whose self-professed ideological positions he is at variance with—and without a manifesto except the hyperbolized anecdotes he shares on TV and tales of his messianic exploits that his online devotees tell excitedly on social media.

(The Labour Party pretends to be a progressive, anti-imperialist, populist party that opposes withdrawal of subsidies, but Peter Obi is a right-wing, economically conservative, neoliberal evangelist who thinks there’s no alternative to the withdrawal subsidies from economically disadvantaged members of the society).

Should Obi beat the odds and become president, it would be interesting to see how he will rule with no member of his party in the National Assembly since his supporters justify the abysmal electoral performance of the Labour Party in Osun and Ekiti states on the grounds that he is the only reason they will vote for the Labour Party in 2023 and that their love for him isn’t transferable to anyone else.

The implication of Atiku’s take on the numerical strength of Nigerian social media presence is largely correct—at least on the surface. Out of Nigeria’s more than 200 million people, only about 110 million have access to the internet, representing a little over 50 percent of the population. This number may be overestimated because most Nigerians have more than one Internet-enabled phone.

However, of the 110 million people who have access to the Internet, only about 43 million are on social media as of 2022, according to Statista, which projects that the number may climb to 53.15 million by the end of the year.

Of the more than 53 million Nigerians on social media, fewer than 5 million are on Twitter, and there are about 32 million on Facebook, which ignores an obvious overlap because there are many people who are simultaneously on both platforms.
WhatsApp has by far the most users in Nigeria, but estimates vary wildly. Again, taking into account the fact that most Nigerians have multiple phones, which is a rarity in the West, these numbers may be overstated.
So, in sheer numbers, there are comparatively few Nigerians on social media, and since the North lags behind the South in Internet penetration, Atiku is definitely factually correct to say most northern voters aren’t on social media.
But it’s not that simple. In communication theory we talk of the multi-step flow theory, which basically shows that influence on people isn’t always direct; that media messages often first flow to opinion leaders who in turn use their conversational currency and social capital to influence people who look up to them for information and guidance.

In today’s world, opinion leaders are found on social media, and research after research has shown that opinion leaders who enjoy social, political, and cultural capital among vast networks of people can and do influence people who have no access to social media to vote in certain ways.
So, politicians ignore social media—and opponents who are popular on social media— at their own peril. But it’s also risky to assume that social media popularity necessarily translates to electability, particularly in Nigeria where dedicated troll farms can skew social media signals.
The rest of Atiku’s interview was, to be frank, way more praiseworthy than I was prepared to concede. Even if you disagree with him, you can’t help but admit that he is well-informed and has thought through a lot of the issues he talked about.
But Atiku’s sly characterization of Bola Tinubu as a Muslim chauvinist who wanted to pair off with him in a presidential run in the 2000s in defiance of Nigeria’s religious sensitivity was a little below the belt.
Like many people, I want to see our diversity reflected in the upper reaches of the political hierarchy in the country. But to present Tinubu’s choice of a Muslim running mate as evidence of his hatred of, insensitivity to, or disregard for, Christians is to be simplistic. He did it out of cold, calculative political opportunism, not anti-northern Christian prejudice.

Unlike MKO Abiola, Tinubu isn’t an observant Muslim. As I pointed out recently, until recently, Tinubu didn’t identify with Islam publicly, was hardly seen in a mosque except during eid prayers when he was governor of Lagos State, was never known to be a member of any Muslim organization, is married to a pastor, and all his children are Christians. He sees himself first as a Yoruba man before he is a nominal Muslim.
Compare him to MKO Abiola who was the Baba Adini of Yoruba land (i.e., ceremonial head of Yoruba Muslims), championed the introduction of Sharia in Yoruba land, supported Nigeria’s contentious membership of the Organization of Islamic Conference, (OIC), built hundreds of mosques, and was active in the Nigerian Supreme Council for Islamic Affairs (NSCIA).
Abiola’s confidence in his Muslim bona fides caused him to initially insist on a northern Christian running mate in 1993 until he found out that it was more about access to power by northern Muslim elites than it was about representational justice.
Tinubu doesn’t have MKO Abiola’s Muslim credentials. Had Tinubu picked a northern Christian running mate, his ticket would have been described as a Christian-Christian ticket or, at best, a Yoruba/Ogboni/Babalawo-Christian ticket in the Muslim North.

If Tinubu reasoned that the ticket, however it’s pilloried in the Muslim North, would win him the election, he would go for it in a heartbeat. After all Olusegun Obasanjo won the 2003 presidential election without the Northern Muslim vote, and Goodluck Jonathan won the 2011 presidential election without the Northern Muslim vote.
But most northern Christians have soured on the APC over the years and are unlikely to vote for Tinubu and the APC en bloc even if he chose a northern Christian running mate. So, he had a choice to make: show sensitivity to religious representation by picking a northern Christian running mate, which would guarantee his loss, or risk inviting the fury of people who won’t vote for him anyway by choosing a northern Muslim and be more likely to win the election. He chose the latter.
Not being an observant Muslim himself, he obviously didn’t pass over northern Christians out of spite. He simply didn’t want to give up the entire Muslim north, which is currently APC’s stronghold, to Atiku Abubakar. That is all there is to it. Blame Nigeria’s primitive, particularistic politics for this.

Atiku Abubakar knows this. When Tinubu offered to run with him, it wasn’t because he was insensitive to Christians. It was because he calculated that it was the easiest pathway to the presidency for him and that Atiku’s perception as a liberal, broadminded Muslim—and him as a nominal Muslim— would make it possible.
For instance, in a September 14, 2005, secret cable exposed by WikiLeaks, US Consul General Brian L. Browne wrote that Tinubu wanted to be vice president to either Atiku Abubakar or Muhammadu Buhari but was self-conscious of the perception that either option would present the country with a Muslim-Muslim ticket but thought it would be easier with Atiku than with Buhari.

“While Tinubu did not see this [i.e., being vice presidential candidate] as a big problem with Atiku (due to Atiku’s noted religious laxity and his pro-Western outlook), it would be a heavy cross to bear for a Buhari-Tinubu ticket because of the perception in many southern Nigerian minds that Buhari is a religious zealot,” Browne wrote.

“Because of this factor, Tinubu asserted he had begun to shift his focus, which had been exclusively on the vice presidency, to see the Senate as a nice place to land upon exiting the governor’s mansion.”
Well, let’s wait for Tinubu’s own interview in the coming days.