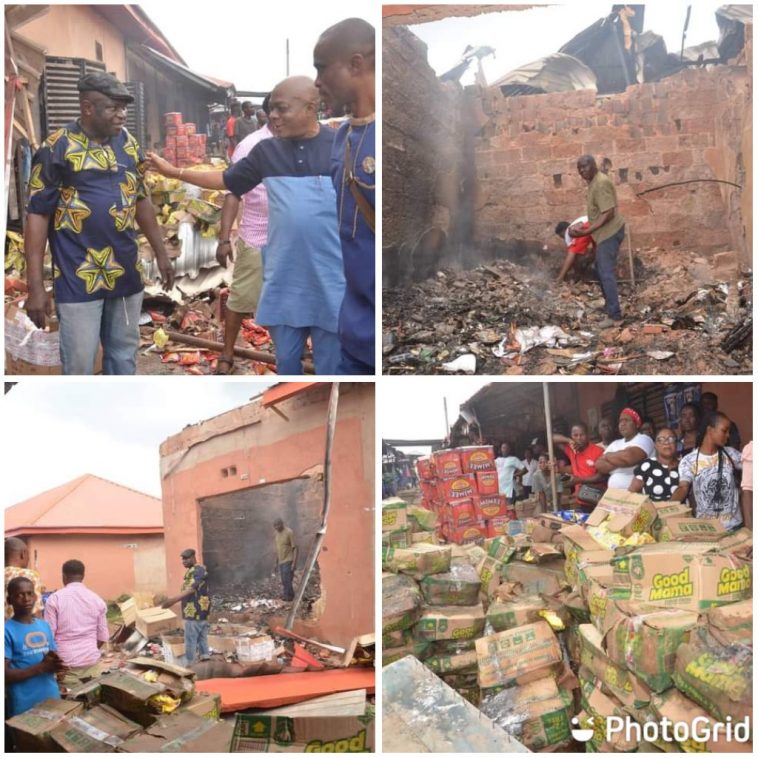 Commisioner for Trade and Investment Chief John Okiyi Kalu Wednesday visited the scene of the fire outbreak at the ‘Provision Line’ of Ubani Market, Umuahia, to sympathise with victims of a midnight fire that razed the section of the market and destroyed goods worth millions and ordered full investigation into the cause of the fire.

Men of the Abia State Fire Service and emergency response team quickly responded to the distress call and completely put the situation under control and salvage unaffected goods.

During the visit, the Commissioner represented by the permanent Secretary Sir Michael Egwu accompanied by top management staff of the ministry spoke with the victims at the scene.

The Commisioner who described the incident as “unfortunate”, assured the affected traders of government’s support, saying the State Government will support the victims to be back on their feet.

He said: “On behalf of the State Government, I commiserate with the affected traders over this unfortunate incident, but we thank God that no life was lost.

“We will start full investigation into the remote causes of this incident, so that we can plan to forestall incidents like this in future. As a government, we will look at what support we can render.”

He reassured the traders of government’s resolve to ensure adequate safety measures around the market and across all markets in the State with the aim to forestall future occurrence.