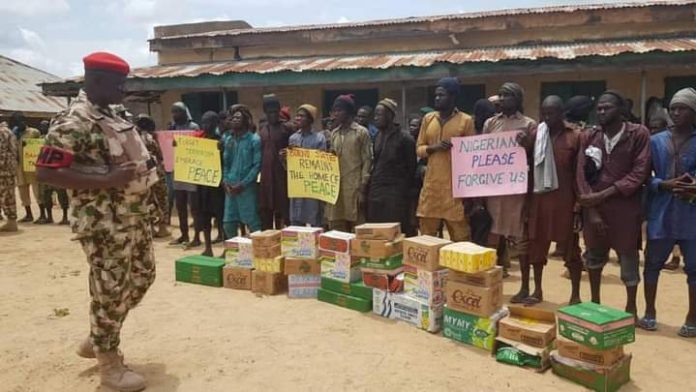 The reports about mass surrender of Boko Haram terrorists have continued to dominate the air waves. In fact, as at this Thursday, about 1000 fighters and their family members have so far surrendered to the troops.

This unprecedented number of terrorists abandoning their evil ways and laying down their arms is the outcome of intense pressure from troops’ sustained offensive actions. But there is one concern around this otherwise cheery development that has elicited divergent views and reviews both in the media domain and the public space. It is the vexatious issue of what becomes or should become the fate of the surrendered terrorists.

Expectedly, a lot of emotions have gone into the analysis and commentaries around the issue by Nigerians whose angst towards the terrorists is justifiably high. In fact, if the cold-bloodedness, bestiality and brutality of Boko Haram terrorists towards innocent folks who are minding their own businesses are put into consideration, you would be tempted to recommend summary execution of such vicious fiends.

If the stress that our security forces have passed through and the unquantifiable sacrifices a lot of the gallant troops have paid in the past decade in the course of carrying out their constitutional responsibility of defending the sovereignty of Nigeria from Boko Haram terrorists and their collaborators are considered, one would advocate the denial of any clemency for the surrendered villains.

If the humanitarian tragedies in the form of dislocation of families, truncation of dreams and rendition of millions of innocent citizens into Internally Displaced Persons (IDP) camps which the bestial activities of Boko Haram terrorists provoked is reflected upon, you would want to prescribe jungle justice for the surrendered scums; if the humongous resources wasted, properties destroyed and social fabric disrupted as result of Boko Haram violent campaigns in the north east and elsewhere are factored in, nobody will look back before obliterating any of them in sight.

And so, the skepticism and emotions that are running wild among Nigerians regarding what to do with the surrendered Boko Haram fighters are pretty much understandable but you see, Nigeria is a nation governed by law and the Nigerian military is an institution guided by law and rules of engagement. Domestic and international laws, particularly Law of Armed Conflicts and the Geneva Convention clearly stipulate that when an adversary surrenders or once he is injured to such a degree he is no longer able to fight, you do not shoot at him or kill him.

The law goes on to say that the best you can do is to take them into your possession (more like ‘protective custody’) by moving them out of battle zone. You document them and immediately commence profiling process by instituting investigations to ascertain the level of their involvement and level of crime they might have committed. Certainly there must be differences in their levels of culpability or blameworthiness in the crime they are perceived to have committed, and as such, those with serious involvement will have to be prosecuted and sentenced up to and including capital punishment if the court so decides. You can do all that but you shouldn’t kill someone who has surrendered to you, an indication that he no longer willing to harm you or capable of posing any threat to you. The laws equally state that you cannot withdraw his citizenship and tell him to leave Nigeria. This is what the international law says and as a responsible member of the international community and signatory to these laws and conventions, Nigeria government and the Nigerian military have no option than to abide by them.

Let’s get this clear: it does not mean that because they have surrendered, they will automatically be asked to go home and sin no more; not at all. Before they are released or integrated into the society, they must undergo rigorous and calibrated ‘detoxification’ process in the form of de-radicalisation, rehabilitation and reorientation programmes. I want to believe that if there is any set of people who understands this important fact, it should be the military that have borne the brunt of Boko Haram’s intransigence including paying the supreme sacrifice by some of its troops.

The important take away here is that the law must take its course for justice to reign and also to engender deterrence to similar criminality in the future. As someone noted somewhere, repentance is no defence in law neither should someone use their capitulation to the might of the state to buy forgiveness for heinous act of terrorism.

In effect therefore, the decision to abide by those laws is never and should never be an indication of compromise or a hint of any ulterior motives on the part of government or military authorities as some cynical commentators would have their audiences believe. The truth rather is that the decision to take the moral high ground of operating within the confines of law of war and decency not only hallmarks Nigerian military’s sense of responsibility but equally strengthens the non-kinetic part of Nigeria’s counter insurgency and counter terrorism strategy. Come to think of it, one can only but imagine the kind of outrage it will provoke in the media and among the same people who are running with the ulterior motives narrative if the troops were summarily executing those terrorists who decided to turn a new leaf. I’m sure by now, the likes of Amnesty International and the likes would have issued reports upon reports how the Nigerian military are “killing unarmed people”. That is the reality of matters like this; whatever action you take will always be open to different interpretations.

As Sun Tzu, the Chinese military tactician and philosopher of yore wrote in his classic, The Art of War, the acme of military skill is to defeat the enemy without firing a shot. It will therefore fit into Nigeria’s counter insurgency strategic policy if our military wraps up the war on terror in the north east with less gun fire and more of changing rigid mindsets. And this is not just about Boko Haram terrorists. The Chief of Army Staff, Lt Gen Faruk Yahaya was explicit in his admonition to all terrorist groups operating in any part of the country to abandon their illegitimate cause, give up their arms or be prepared to test the full might of the Nigerian military.

Gen Yahaya went further to reassure Nigerians that the Army being a professional military organisation will continue to act in accordance with the dictates of the Nigerian constitution, as well as international best practices and that the NA will never encourage any act of lawlessness or extra judicial killings. Accordingly, he said, “all surrendered terrorists will be received, processed and passed on to the relevant agencies of Government for further assessment in line with the extant provisions”. These assurances should assuage our apprehensions over what becomes of the repentant and surrendered Boko Haram terrorists.

FENRAD: Self-determination is a Principle of Human Rights, What then is Sit-at-home?