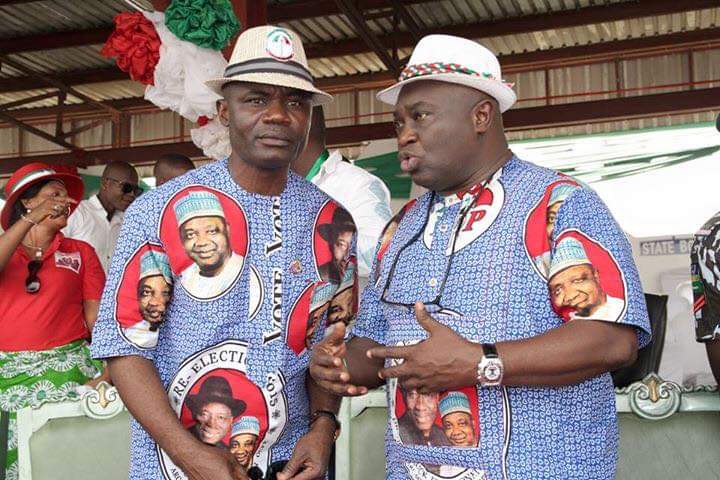 Abia State Governor Dr Okezie Victor has opened up over the 2017 invasion of the home of the Leader of the proscribed Indigenous People of Biafra(IPOB) Mazi Nnamdi Kanu.

Recall that the Nigerian Military had sometime in September 2017 invaded the Afaraukwu home of Mazi Nnamdi Kanu where properties were destroyed.

The Governor who spoke in an Exclusive interview with the ” Nigeria now with Dickson Iroegbu” in Abuja, said the army commander at that time, came to his office to inform him that he had orders to arrest Nnamdi Kanu .

In his words “I was not told that anything like that(invasion) was going to happen, I only saw the GOC who was at Enugu that time, he showed up in my office and told me that he will arrest Nnamdi Kanu, I asked him why, he said he had orders to arrest him, I told him to give me few hours and he obliged, I called the traditional rulers and asked them to talk to Nnamdi’s father who was a traditional ruler to persuade Nnamdi to come and have a word with the GOC, but Nnamdi Kanu refused, saying he was under seige already in his house, I didn’t know that the soldiers were already everywhere”

Speaking further, the governor said that what is happening in the South East is as a result of total disregard of the interest of the South East people.

“What has happened in the South East is a combination of all manner of things, one is the total disregard of the interest of the South East by the center and flagrant and provocative comments from both Government and various elements and characters”

“It is difficult to find peace wherever injustice pesters, Nnamdi Kanu is saying that if we are not wanted, could we go, there are three options available to every man, integrate me, let me be part of it and the other one, endure untill you die or exit but the system is saying, endure untill you are annihilated, the Leadership of the nation is not engaging”

“My argument and my support was for a President of Igbo extraction, first of all , the conversation of how a person can become a President in a country like Nigeria that is multi- dimensional, multi-lingual, multi-cultural requires that you engage and you talk about it, you would want to convince people, and in doing that, you must be strategic on how to play the politics of emergence, I said the first thing to do as a Governor is to first of all begin to say that the Presidency must come to the South and we met in Lagos.

“For us and for we, my strategy was for us to get it in the South, so that we can begin to micro zone, I discovered that the conspiracy against the Igbo man is palpable,you can feel it, you can touch it.

“My support for a South Easterner is not necessarily that we haven’t taken a shot at the presidency, but because the Igbo man believes in Nigeria than any other tribe, the Igbo man is not even prepared to abandone sambisa for any terrorist or any bandit, we can trade in sambisa, for that we have demonstrated our Nigerianess, if there is a people who believes in one Nigeria, it is an Igbo man, For instance, Presidency is important, but of greater important to an Igbo man is whatever that can facilitate Trade and Commerce”

The Governor said he opted for Governor Nyesom Wike of Rivers State because he was a man that had the courage and has the capacity to call a spade a spade.

“The people of the South East can only treat people bad if they have a better option, fire is not better than frying pan, there is no point comparing an elephant with an ant, PDP understands and manages our mechanisms better”

Speaking over his relationship with his Deputy Rt Hon Udo Ok Chukwu, the Governor said the Deputy Governor never informed him of his intention to contest for the Governoship of Abia State .

“My Deputy didn’t tell me he wanted to replace me,he didn’t consult me, he had gone everywhere before they advised him to talk to his Governor, when he finally came, I told him he has come a bit late, mind you, am the only Governor in Abia State that has ran almost 8years with his Deputy”

“He became very ambitious and refused to consult me, I don’t have any place in my heart to harbour bitterness, otherwise I would have done what I should do, everybody knows what a person in my position can do to a recalcitrant Deputy,but I don’t think that is a way to go”

On his emergence as the Senatorial candidate of the People’s Democratic Party (PDP) of Abia South Senatorial District, Governor Ikpeazu said the Senate was never a retirement place for former Governors but another place of Service.

“My people in Abia South needs somebody that can plunge them to the center and see how we can leverage policies at the Federal level and complement policies at the State level.” he Concluded.