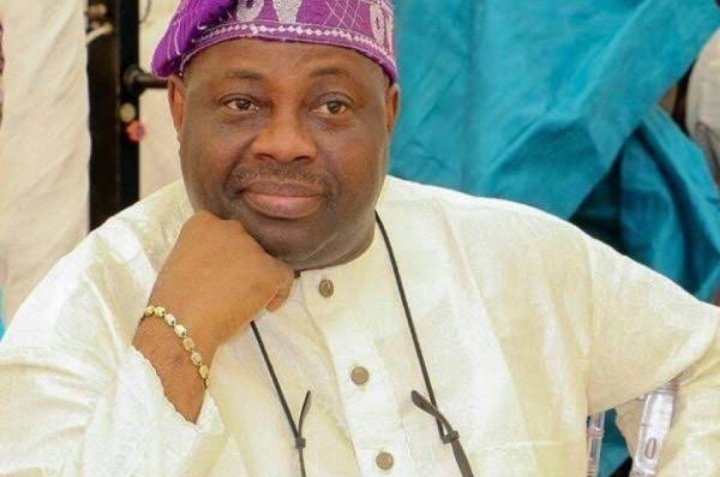 Columnist Dele Momodu has written an open letter to all 17 Southern Governors of Nigeria in celebration of his sixty-first birthday.

In the open letter published via thisdaylive.com, the Edo State-born businessman commended the Governors for successful deliberation.

Please, permit me to write you this open letter. You will understand, and probably appreciate my epistle if you’re patient enough to read and digest its content, which I wrote not because of any mischief but out of real patriotism. I needed to state this clearly, and unequivocally, from the outset, because our country has become so divided, and degraded, to the extent that we can no longer engage in simple, decent and straightforward conversations, without someone reading satanic meanings into the motives behind your intervention.

By the grace of almighty God, I will be 61 years old on planet earth tomorrow, Sunday, 16 May 1960. I was born just a few months before Nigeria attained independence. Even if I was unaware of my environment at that stage, I grew up with great expectations and the hope that Nigeria has the potential of becoming one of the greatest countries in the world. This hope was based on certain critical assessments. Nigerians are greatly blessed and naturally endowed with some of the most brilliant humans and the most fertile lands and diverse mineral resources.

I was born in the ancient city of Ile-Ife and my proximity to the University of Ife, now Obafemi Awolowo University, Africa’s most beautiful campus, afforded me the opportunity of learning literature, linguistics, philosophy, history, sociology, religious studies and so on. I grew up as an idealist having been brought up and indoctrinated in the seminal works of Walter Rodney, Frantz Fanon, Amilcar Cabral, Chinua Achebe, Wole Soyinka, Nawal El Saadawi, Ngugi was Thiong’o, Paulo Freire and others. Most of the earliest authors I read painted a picture of Africa that was savaged and ravaged, by the white colonialists who underdeveloped our continent. Little did we envisage that the neo-colonialists, the new Black slave masters would act far worse and commit greater atrocities than those who came from far-flung places with their ships to ferry us into slavery in their countries. We did not in our wildest imagination envisage that our leaders will become so bad that our youths and elderly would be forced to voluntarily borrow money, procure visas, buy air tickets, join sea pirates to run into slavery and servitude, uninvited.

You will agree with me, Sirs, that this is the sad but true picture of our situation today. Let me now return closer home. My childhood occurred under the Regional governments in Nigeria. Each Region developed or retrogressed at its own pace. I still wonder what got into the brains of our leaders that they decided to opt for the outlandishly expensive and grandiloquent American system of Democracy which has now forced us to practise capitalism without capital. But I’m not here to bemoan our past but to focus on our future, which is currently threatened from all fronts.

As Femi Babalola noted above, if we were able to manage our differences delicately in the past, President Muhammadu Buhari has finally shattered the facade. And his acolytes have not made matters better. They have been talking big, arrogantly and recklessly, as if Nigerians have no right to criticize, oppose and admonish the President despite his abject cluelessness in matters of managing a multi-ethnic and multi-religious country such as ours. Is it not strange and ironic that the ruling party, APC, used that very word, cluelessness, to describe and deride President Goodluck Jonathan, but they’re unwilling to tolerate the same today? I had read as a young student that the only thing evil requires to thrive is for good men and women to keep silent. That has been the bane of our political arrangements and experiments. This is why many of us appreciate and applaud your recent meeting in Delta State and what has been tagged “The Asaba Declaration!” Even if it amounts to little or nothing, it is a sign in the right direction. You’ve gained influential admirers in two legal luminaries, Mr Femi Falana (SAN) and Dr Olisa Agbakoba (SAN), both of whom I interviewed on my Leadership series in the last two days.

At a time Nigeria has almost arrived at the periphery of Golgotha, both men still hold on tenaciously to the view that it is not too late to rescue the country. Although my first special guest this week, Professor Banji Akintoye, vehemently disagrees with them and is already a leading champion of the agitation for the Yoruba nation, they remain optimistic that we can still move away from the brink. But they left no one in doubt that if members of the political class fail to do the needful urgently and the gaping injustices continue unabated, things might fall apart beyond repair. They are worried at the total confusion and anarchy that will ensue amidst which the political office holders may lose their current positions in a state of emergency.

While commending your intervention, Dr Agbakoba advised that you need not waste time and resources sponsoring any fresh national conference. You can engage your legal advisers to look at the 1999 Constitution and mark out the grey areas and forward it to the National Assembly. Mr Falana believes that the conference that was organized under President Jonathan and its outcome has never been touched, so why waste more time and resources. Please, consider the observations of these great Nigerians. Dr Falana was very emphatic that you have the right to control every inch of land space in your states and that the Federal Government cannot challenge you. He said you’re also legally covered, by the principle of self-defence, to defend your people, and no one can challenge you on that also. It is your duty right now and your immediate responsibility to safeguard the lives and properties of your people.

ALSO READ:  Check Out The Names Of Members Of LAUTECH’s New Governing Council

What I would like to add is that you should stop waiting for the Federal Government to do the right things. Whether they do or not, you need to think outside the box on how to transform your States and develop the well-being of your people. The biggest problems causing the mayhem in all parts of Nigeria are mass poverty and abject ignorance. You must continue to invest heavily in primary and secondary education and vocational training thereafter. The formative years are very important. It is sad and saddening that most parts of the North have virtually abandoned the Almajiri projects initiated by President Jonathan. Perhaps, the spate of terrorism and banditry would not have become exacerbated.

Each state has what it has pleased God to endow it with, but many have been wasted, underutilised or untapped. All the legal encumbrances should be cleared urgently because there is no basis for the impoverishment of Nigerians with all that we possess, free of charge. Besides, the future of our country is in our talented youths who care very little about the restructuring everyone is hollering about. All they want is the infrastructure and enabling environment put in place to enhance and build on their talents. In this way, the States will thrive even more. Therefore, please, worry less about politics and power. Only God can give power, and only He can take it back. No matter how long you stay in power, you must quit one day. No one has taken his political office back home. Therefore, it is not how long you govern but how well.

I’ve been very worried about the almost master-servant relationship that exists between the States and the Federal Government. I believe this is the reason for our slow growth. The Federal Government will continue to disrespect you and behave like a village headmaster if you do not liberate yourselves. While it is good to respect the office of the President and other principal officers of government, you should not be subservient in the process. If Nigeria must survive, it would be based on mutual respect and reciprocity. I salute the courage of a few Governors who have stood up stoutly in the Defence of the fundamental rights of their people.

Finally, you need to reach out urgently and seek the cooperation of your National and State legislators. They have major roles to play in the next few months. If you make the mistakes of worrying more about elections, as Dr Agbakoba noted, there may be no country in respect of which you will conduct the elections. I hope and pray you will give kind considerations to my humble recommendations.

Thank you and warmest regards.