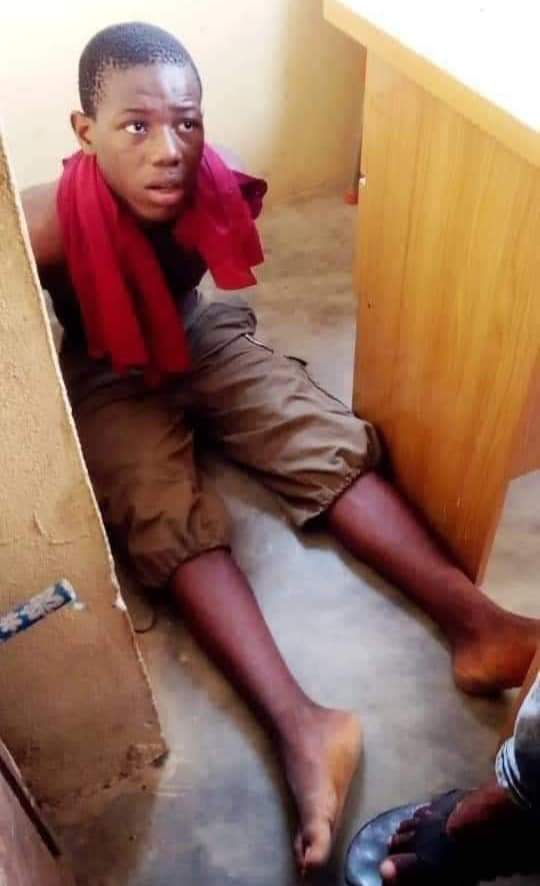 A 35-year-old lady identified as Esther Ijeoma Obasi was brutally stabbed to death by her 16-year-old neighbour whom she gave food in Lagos State.

It was gathered that the deceased fed the young boy when he was hungry as his mother was not around.

But the boy, Chinonso Ejike, attacked the woman a few hours later, with a knife and stabbed her up to 8 to 9 times till she slumped.

After stabbing her, Chinonso dragged her bleeding body to a bush in the background to submerge it in a swamp and then started jumping up on the street shouting that he has finally done it.

People who saw him with blood all over his body asked him what he did but he ignored them and ran away.

The patches of blood were traced to the backyard where Esther was seen struggling for breath. She was rushed to the hospital but died on the way as she was stabbed in multiple places.

Hunt for Chinonso started but he was not found until the next day in an uncompleted building sleeping and with Esther’s phone. He was caught and taken to the police station.

According to his confessional statement, after he was arrested by Police, he killed her for refusing to give him a new phone she just bought.

But the Lagos State Police Command was not buying into his motives and transferred him to another police cell where he was tortured.

Through that, Chinonso disclosed that Esther reported him to his mother when he found him peeping through her window net into her room.

She discovered that there was a net that was torn by Chinonso and punished him for that while also reporting to his mother.

Chinonso was angry about the whole scenario and told his friends who urged him to kill the neighbour.

The victim later changed his statement and revealed that to get promoted to a higher rank in his cult group, he was told to kill somebody to show that he was strong-hearted. So he choose his neighbour who reported him to his mother.

It was also gathered that Chinonso has been known around the area as a thief and has been in and out of prisons in the past.