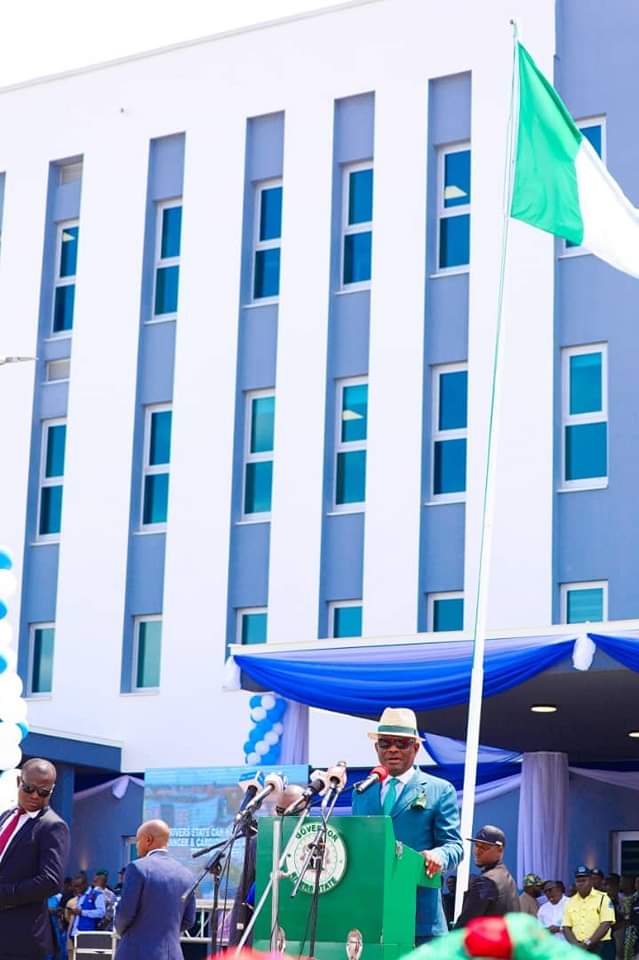 Rivers State governor, Nyesom Ezenwo Wike says his administration has proven that through budgetary integrity, commitment and prudence nothing is too difficult to achieve in governance for Nigerians.

The governor noted that seamlessly, his administration delivered the centre within agreed timeline of 14 months for the good of Rivers people and Nigerians at large.

He noted that one of the reasons why federal government projects takes years to accomplish is because National Assembly often allocate paltry fund to projects earmarked for execution every fiscal year when it knows that such funds are grossly inadequate to achieving any meaningful milestone.

Governor Wike stated that such practice has continued to encourage the abandonment of projects and promoted inadequacy in terms of governance, project delivery and public service.

“That is for a project that will cost N26billion, you are putting N500milion in the budget for one year. Then, it will now take you more than 20 years to achieve it. By then, the cost will move up from N26billion to one hundred and something billion Naira.

“That is why you see in this country abandonment of projects. If we are serious in this country to say that we will get the best, I can tell you that it is not impossible.”

He mocked those who said they had set out to build the Justice Karibi Whyte Hospital that never came to limelight despite the huge fund put in that venture.

Governor Wike informed that already, there is partnership arrangement going on based on the strength of the understanding brokered with the United States Consul General, Mr Will Stevens.

The governor said Mr. Stevens had visited the hospital and is currently making contacts with people who knows how best to run hospitals profitably, which will be considered to take over the operations of the centre.

He also explained that the facility was named after Dr. Peter Odili because he is one Rivers leader who had operated one of the best clinics in the State, served as governor meritoriously and now contributing to medical education in the State.

The governor expressed joy over the accomplishment of the centre and stated that it stands as a report card and evidence of fulfilment of promise made to Rivers people.

Performing the inauguration of the project, His Highness, Emir of Kano, Alhaji Aminu Ado Bayero said it is pertinent to commend the sagacity and foresight of Governor Wike for initiating and actualising such novel project.

He noted that the centre, which is the very first of its kind in the Niger Delta and Nigeria as a whole, will surely benefit people beyond the boundaries of the South -South region.

“The dreaded disease of cancer, and its devastating effect on its victim cannot be overemphasized. It does not only destroy its victims and their families emotionally, but renders them financially incapacitated.

“Consequently, cancer diagnosis and treatment can be said to be beyond the reach and affordability of the common man.

“So, with the commissioning of this center, those afflicted with this disease and other oncological ailments can at least breathe a sigh of relief, here is a succour at their doorsteps.”

He said that in the spirit of good neighbourliness and being brother’s keepers, patients from neighbouring states and even States as far as Kano will not be turned away from the God sent cancer relief centre.

According to him, there is no gainsaying that infrastructure of this magnitude are very difficult to maintain and appealed for a positive paradigm shift in attitude towards maintenance culture.

“We call upon the incoming administration and the people of Rivers State to own this improved infrastructure by ensuring that this very vital centre is well equipped and maintained at all times.

“The facilities should regularly be upgraded to meet global standards. The staff should be trained, retrained and updated on latest medical technology and innovation.

He also noted that it is a well known fact that due to the oil and gas exploration in Niger Delta, some of the International Oil Companies (IOCs) may not have utilized the best global practices in their exploration in the Niger Delta.

Such negligence, he said had thereby exposed residents of this region to diseases caused by gas flaring and oil pollution of the ecosystems and environment.

“It is not also out of place to appeal to the federal government of Nigeria to borrow a leaf from the governor of River State and established similar centers in each of the geopolitical zones so as to alleviate the suffering of those with cancer and cardiovascular related issues.

“This is a good step towards saving our people from embarking on medical tourism, which benefits the economy of other countries at the detriment of ours, especially in these days of scarce and high foreign exchange rates.”

In his goodwill message, former governor of Rivers State, Dr. Peter Odili said he and his family are delighted for the honour done to them with such centre named after him while he is alive.

Dr. Odili said Governor Wike should have been a medical doctor because of the medical infrastructure he had provided in the State which are second to none in the history of Nigeria.

“Look at this edifice. The honourable commissioner for health has lectured us about the uniqueness of this centre. Everything he said about the centre are true, I fully support and endorse.

“The president of Nigerian Medical Association (NMA), has also spoken on it and I said that there is no medical facility in this country, built by a state government that has everything you have here. None can see your break light in your healthcare programme.

“The cancer centre that you have also introduced here, only three functions in the federal republic of Nigeria. This is one of the three. No other one belongs to State government, the other two belong to the federal government.”

In his speech, the NMA president, Dr. Uche Ojinmah noted with delight that Governor Wike fixed the inauguration of the centre to coincide with the ongoing awareness campaign on cancer.

According to him, the administration of Governor Wike has been bold in the provision of medical infrastructure that promote public health and take care of the patients.

In providing the description of the project, Commissioner for health, Prof. Princewill Chike said the Centre among other features has three theatres, Catheterization Laboratory, Radio therapy, Brachy therapy and nuclear medicine.