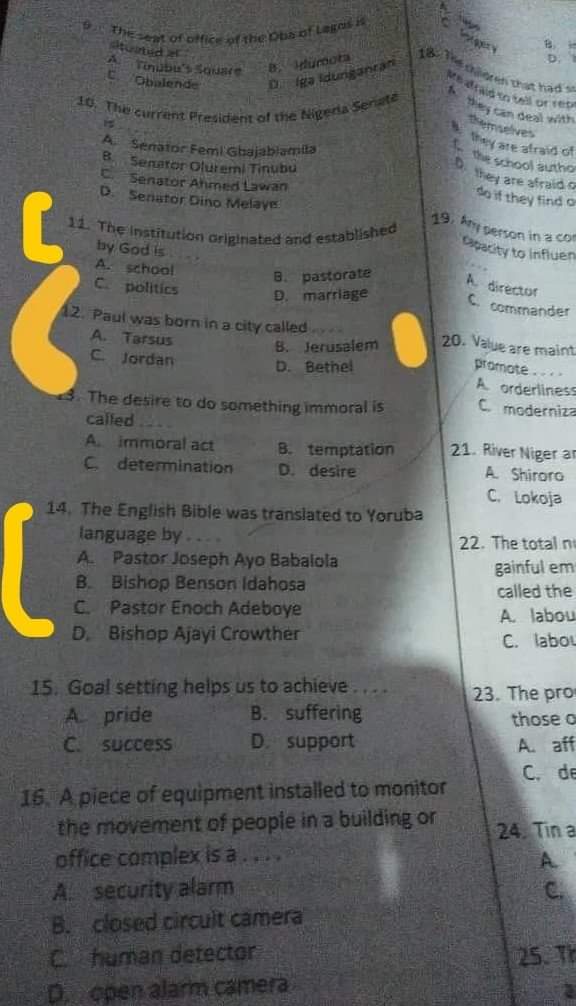 At least 3 questions in a GENERAL KNOWLEDGE exam that public primary school students in Lagos State took for the common entrance this year asked questions that only Christians—or people who’re familiar with Christianity—can correctly answer, putting Muslim and other non-Christian students at a disadvantage.

That’s objectionable symbolic violence, and it must redressed forthwith in the interest of fairness and justice.

See questions 11, 12, and 14. Even I, a journalism professor who attended government-funded Christian missionary primary and secondary schools, can’t answer questions 11 and 12 because I didn’t take Christian Religious Studies as a student.

Let’s start with question 11. To ask students which earthly institution originated from—and was established by—God is to force a religious belief in them, which is a violation of the Nigerian Constitution. That question is in the province of faith, not fact. None of the options is factually correct.

Or did the examiners expect students to choose—and thereby invite them to believe— the “pastorate” as having originated from and established by God? That’s belief, not fact. You can’t legitimately test students’ belief in a general knowledge exam.

Even “marriage” can’t be correct because it’s a well-established fact in the anthropological literature that marriage didn’t always exist. The first recorded marriage between a man and woman has been periodized to be around 2350 B.C. in Mesopotamia. Before then, people just mated without marriage.

There are still societies such as the The Mosuo, a Tibetan Buddhist community, where marriage doesn’t exist.

Of course, “schools” and “politics” are decidedly recent human inventions.

So, what response did the examiners at Lagos State want students to pick as the correct answer?

And why is “imamate” not an option if “pastorate” is an option? This is obviously subtle, backhanded Christian proselytization in a secular, general-interest examination, and that’s unacceptable.

Question 12 is an even more blatant instance of noxious religious tyranny. I have not the vaguest clue where Paul was born. Why should a Muslim or non-Christian kid in primary school know that?

To expect a Muslim kid to know the answer to that question is as unfair as expecting a Christian kid to know who the four rightly guided caliphs in (Sunni) Islam are.

The answer to question 14 may seem obvious to people who pay attention to history, but we’re talking of 11- to 12-year-old primary school kids here.

A Muslim kid in Lagos is more likely to know that the Reverend M.S. Cole was the first person to translate the Qur’an into Yoruba in 1906 than that Bishop Ajayi Crowther translated the Bible into Yoruba.

Most importantly, though, those questions don’t belong in a general knowledge exam. No religious faith should be privileged in a secular, general-interest exam.

The Lagos State Ministry of Education must either cancel the exam or compensate students who missed the “correct” answers that braindead, emotionally stunted religious fanatics who set the questions have in mind.